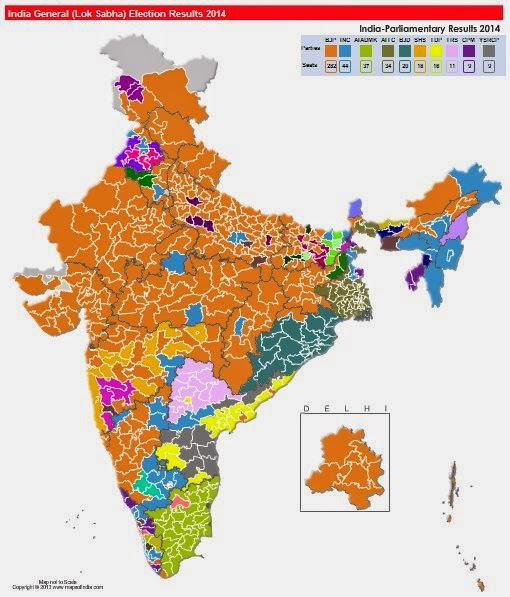 The coming of NDA and BJP in complete majority in the current Lok Sabha election has created an euphoria in the entire nation. The media since last few days has been following Modi like a shadow and bringing its each movement on National Television.

In today's 'Sunday Times' the an article by 'Swaminathan Aiyar' nicknamed 'swaminomics' particualr caught my attention. He claims the popularity of the BJP in Uttar Pradesh and Bihar is attributed to the migrant workers who carried with them stories of the successful Gujarat model which they witnessed. It is a remarkable logic considering the fact that migrant workers from UP and Bihar form a sizeable workforce in western India and has been a target of regional parties like MNS and Shiv Sena since years now.

The eastern states of Seemandhra, West Bengal & Orissa all fall under the region on the right side of the perpendicular and although North-East India can still be given a benefit for being distant, these states on the other hand form a part of mainland.

The biggest challenge for the new government more than anything else would be to get these regions which continues to vote in favour of regional parties in the mainstream of Indian economy. Hilly States and North-East India received attention from the center but the eastern states continued to be ignored.

Just before the election results the BJD offered support to BJP on grounds that it will award a special status to Orissa. With BJP getting clear majority in the Lok Sabha support of BJD is irrelevant however in the interest of the Nation and in the interest of people in Orissa the new government should keep its ego aside and seriously think of conferring Orissa with a special status and usher an economic revival of the status which is not just based on a few mining companies setting up shops there. This incentive will certainly play a vital role in bringing the people of Orissa in the mainstream of Indian Economy.
Posted by Insatiable Nikunj at 00:52